13.1 Miles in the Desert: The Birth of a Trail Runner

Justin Gallegos has been a part of the Jaybird marketing team for 1 year. He’s a music journalist on the side, fully supports the Utah Jazz, and surfs concrete or snow depending on the season.

When it comes to pushing your heart rate, it doesn’t get any more liberating than running. You can go any speed, any direction, and for as long as you want, wherever you want – with or without friends. I should’ve known early on that I loved it by what sports I gravitated towards and which ones I downright rejected.

My dad grew up playing baseball on diamonds that could’ve hosted the Sandlot crew, but I never enjoyed the game. He also, like so many other people I know, obsess over golf, but I just can’t dig it. But from a young age I loved soccer, and I still love playing basketball. Why? Because they allowed me to be on the run. I wanted to move constantly when competing or exercising and anything that didn’t allow for that was just boring.

I continued to run sporadically in my twenties, placing in a local 5k while running in slip-on canvas shoes from Wal-Mart and even completing a mini-triathlon in the same shoes. It was just something that came up every now and then, until February of 2017, when I started working at Jaybird. Jaybird introduced me to the fascinating world of trail-running – a world for outsider athletes and weird adventurers, my kind of people. I had always heard how bad running was for the knees, but trail-running was different. The movements were dynamic and the ground was more forgiving than the road. Throw in the humbling views and it wasn’t long before I was hooked. Fast forward to January 2018, age 30, and I just competed in my first trail half-marathon in Moab, Utah. 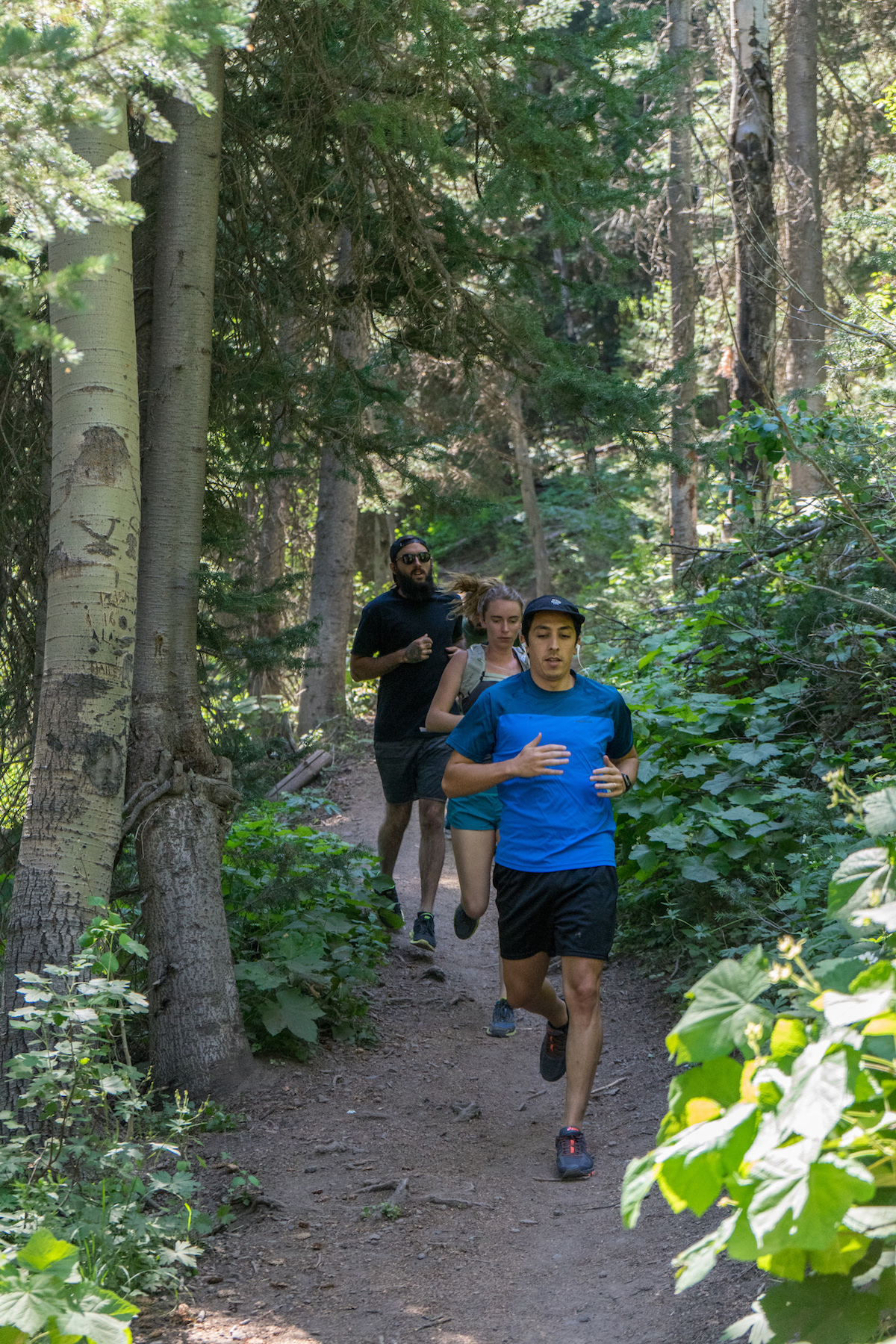 It was a team-running day with the office when I made up my mind. I was on a high from throwing dirt in the crisp, cold air of Park City with friends. We stopped at a summit for some views, and I knew it was time to see just how long I could do this. I wanted to race and push my limits. This was around October and by early December I signed up for the half.

I was running a few times a week, between 4-8 miles per week total, and playing basketball 3-4 hours a week. I thought this would be enough training, but by January, my wife strongly advised that I implement an actual plan. So she reached out to our friend who had run several marathons, and without hesitation, our friend graciously sent me a speed training schedule:

She told me, “The idea is that your mid week runs should all add up to about the mileage of your long run on the weekend. The last week is lower mileage, so you’re all rested up for the race. You could probably wing it and run the 13 miles tomorrow, but the training schedules make sure you don’t get hurt, that you do well for the race since you paid for it and everything, and that you’re not insanely sore after.” It pays to have wise friends.

After getting the schedule, I was psyched. My only goal was to finish without being super sore, but I obviously didn’t know what I was getting into. Nonetheless, I was ready to start my training plan on the first of January, fully committed. Then, just as life does, it threw a curveball at me, and I got hit with the flu from hell. I was literally out for the first week of January – the perfect storm based on my schedule. But I got through it and started running again. I never ran more than a six mile run in the month before the race, and the longest distance I had ever run at this point was 8 miles – this is what you call a lack of preparation. 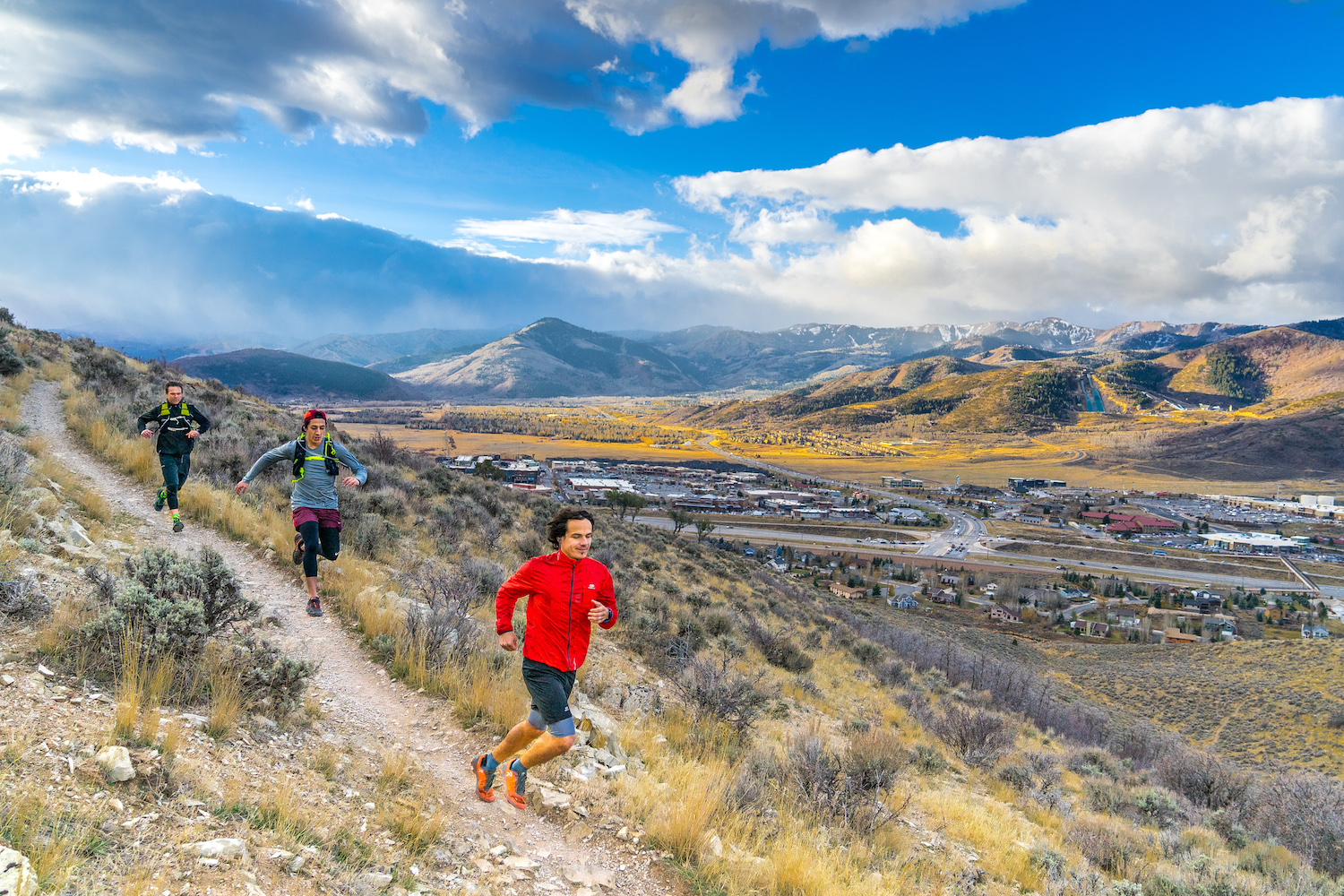 The week of the race, which was on a Saturday, I chose to run a three miler on Tuesday. I felt like I had never fully let my legs rest between my weekly running, basketball, and snowboarding, so I decided I would rest a full three days before the race to have the freshest legs possible – this is what you call inexperienced.

Finally, Saturday came and I felt as ready as I could be. The first mile in I felt a burst of emotion, a runner’s high, seeing people moving like clouds along the desert trails and knowing that I was part of such a committed journey. The up-and-down slick rock was rough on the knees, but the reoccuring views of Arches National Park and the snow capped La Salle Mountains were constantly encouraging. By mile six, I knew I could finish without stopping.

An experienced friend suggested that for hydration and energy I have a smallish breakfast at least 90 minutes before the race. As for during the race, he suggested I take a sports gel at the start line, then another at 45 minutes, and another at 90 minutes (based on my plan to finish just under two hours), and to supplement each gel intake with a little fluid. And this ended up working well for me. 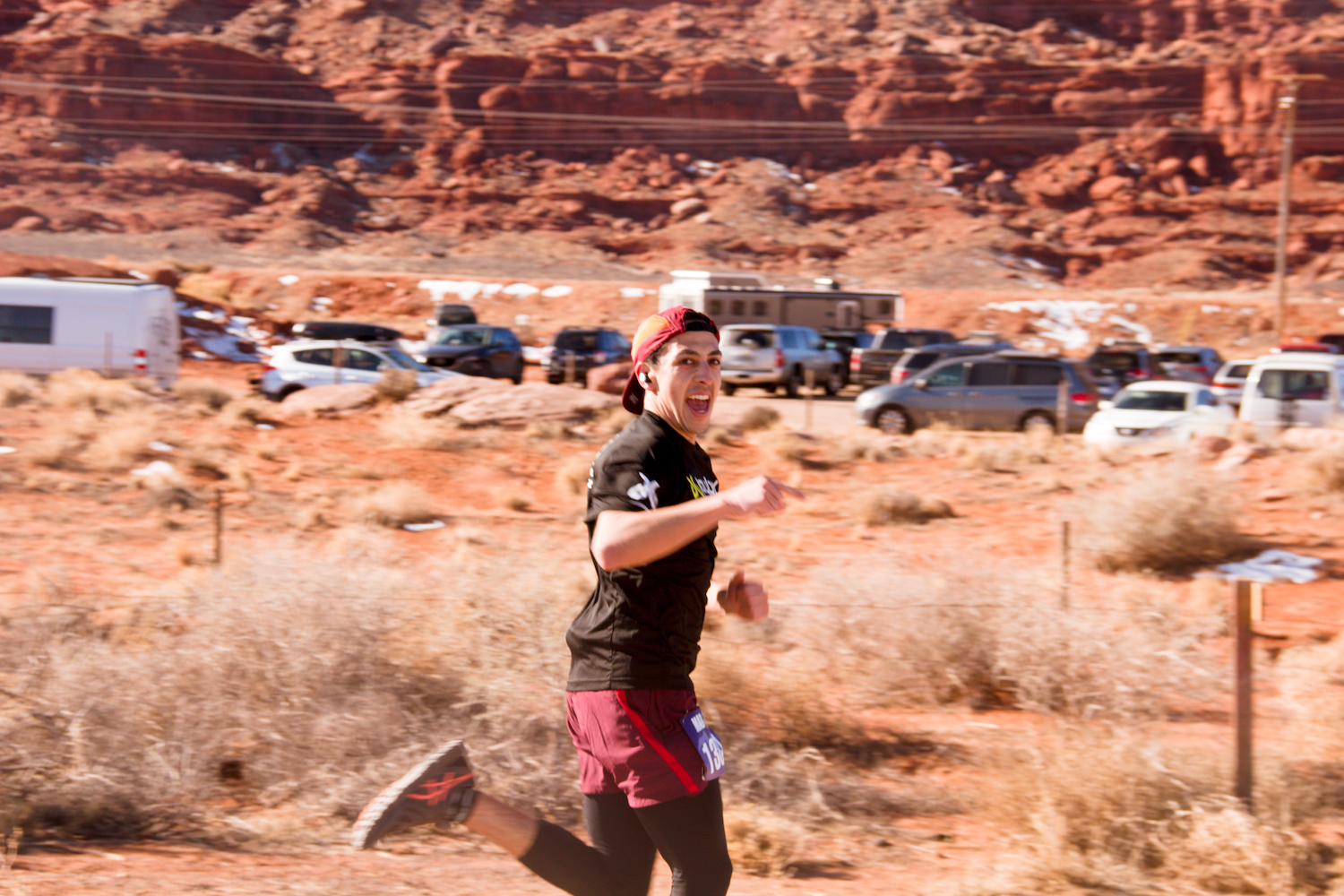 However, I ended up hitting a wall at 10 miles, but I have to credit this to a “shadow runner” who trailed me from mile 7-10. This person totally got me to break my pace by trying to stay ahead of them. Prior to the race, a few friends had told me I’d be fine if I raced to finish rather than racing to win, but it’s too much fun racing to win! This mindset definitely got the better of me. It was hard enough trying to look for blue ribbons, weaving through minimally-marked slick rock, let alone trying to run faster than a better runner. Next time, I’m just going to turn up my music and let that person pass.

By mile 11, I was running the slowest pace I had ever run. As I slogged along into mile 12, I switched the song on my playlist for an extra boost, knowing the end was near. And then I saw my family near the finish line. Once I saw them I felt completely capable of sprinting towards the finish, smiling from ear to ear. This was a crazy mind and body experience that proved to me we’re capable of overcoming pain at any time with the right emotional triggers. My finishing time was 1:58, and I placed 30th out of 214 – I couldn’t have done it without my music. 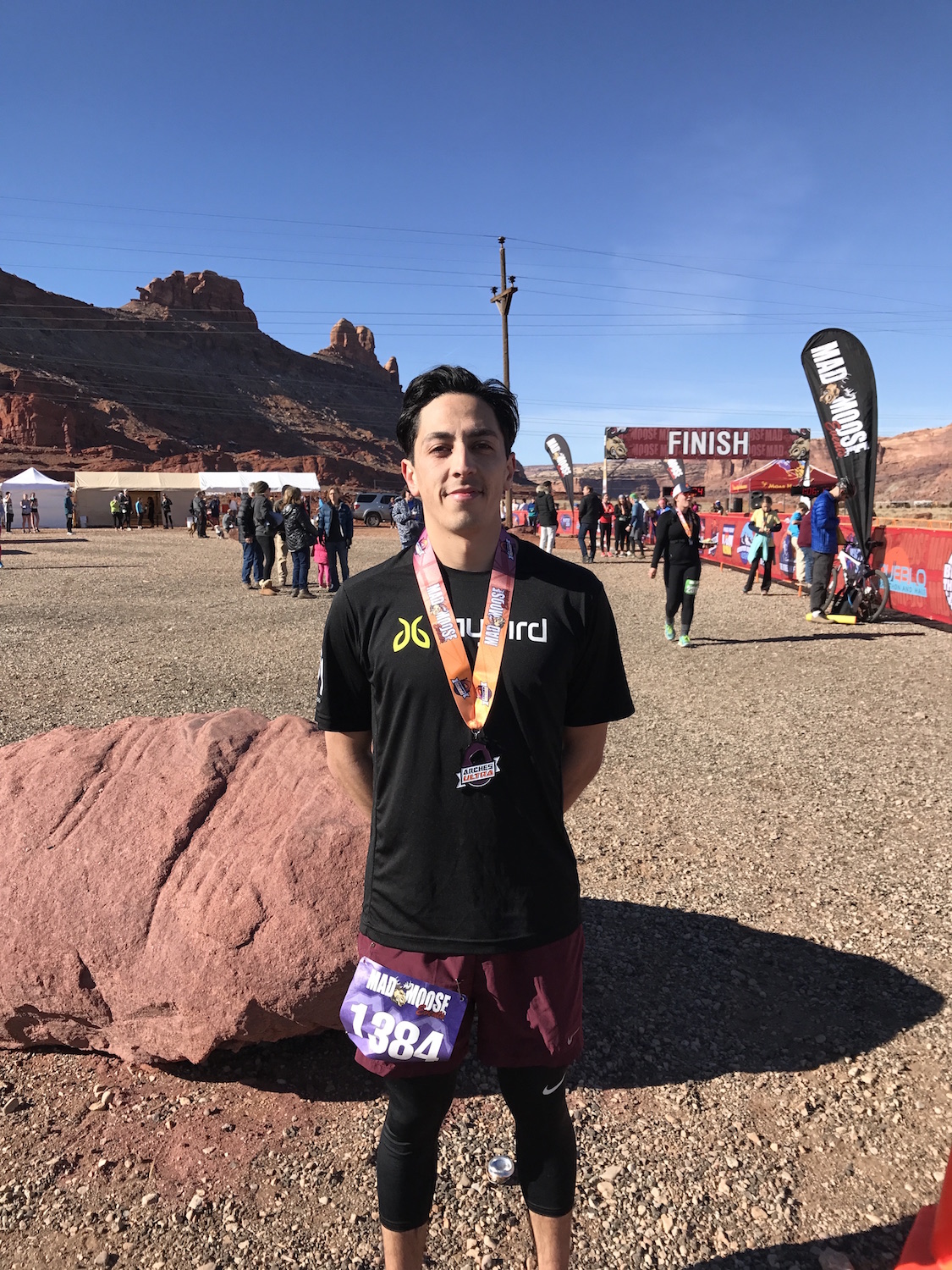 What’s followed since then is a lot of stretching, a lot of inquiring about running shoes, and finding out where I’ll run my first full marathon. Running a half was an incredible experience, and I can totally see how competing in races is addicting, especially when you get to travel for the event. As for my next race, here’s to being fully dedicated to a training schedule and icing my knees as soon as I hit the finish line.