The Nordic Journey: Becoming An Olympian & Saying Goodbye to Pyeongchang

Ben Berand is a 22 year old Nordic Combined Athlete with one pursuit, to fulfill his potential in the sport he loves. He grew up pursuing this dream from the small town of Steamboat Springs, Colorado. He now pursues this dream from Park City, Utah where he has the opportunity to train with some of the best skiers in the world. Together they strive to show the world what USA Nordic Combined is all about.

I’m on an airplane flying away from the Olympics – moving fast yet thinking very slowly. Some experiences in life need contemplation and this is surely one of them. It’s funny, I have dreamed of competing in the Olympics my entire life, but I actually showed up to South Korea totally unaware of what to expect. I believe I can speak for my teammates Jasper Good and Ben Loomis (First time Olympians) when I say we were totally mentally unprepared. We got to spend the first couple days figuring out the busy schedule, lay of the land, bus departure times, and just how difficult homework is to accomplish at the games. It was extremely helpful having some experience on the team with Bryan and Taylor. I remember Bryan telling me his key to the Olympics, “It’s easy to fall into the trap of constantly rushing around because there is so much going on. The trick though – move slowly, execute on what you need to get done, and never rush yourself at the expense of that.” Great words to live by, Olympics or not.

We’ve had to overcome a lot over the years. USA Nordic has not gotten here the easy way. I think being the underdogs is a mentality that suits us well. When I look around at all the other teams, I wouldn’t trade this one for the world. This group of girls and guys is incredible. The pride I felt watching them compete and putting that bib on with them was overpowering. 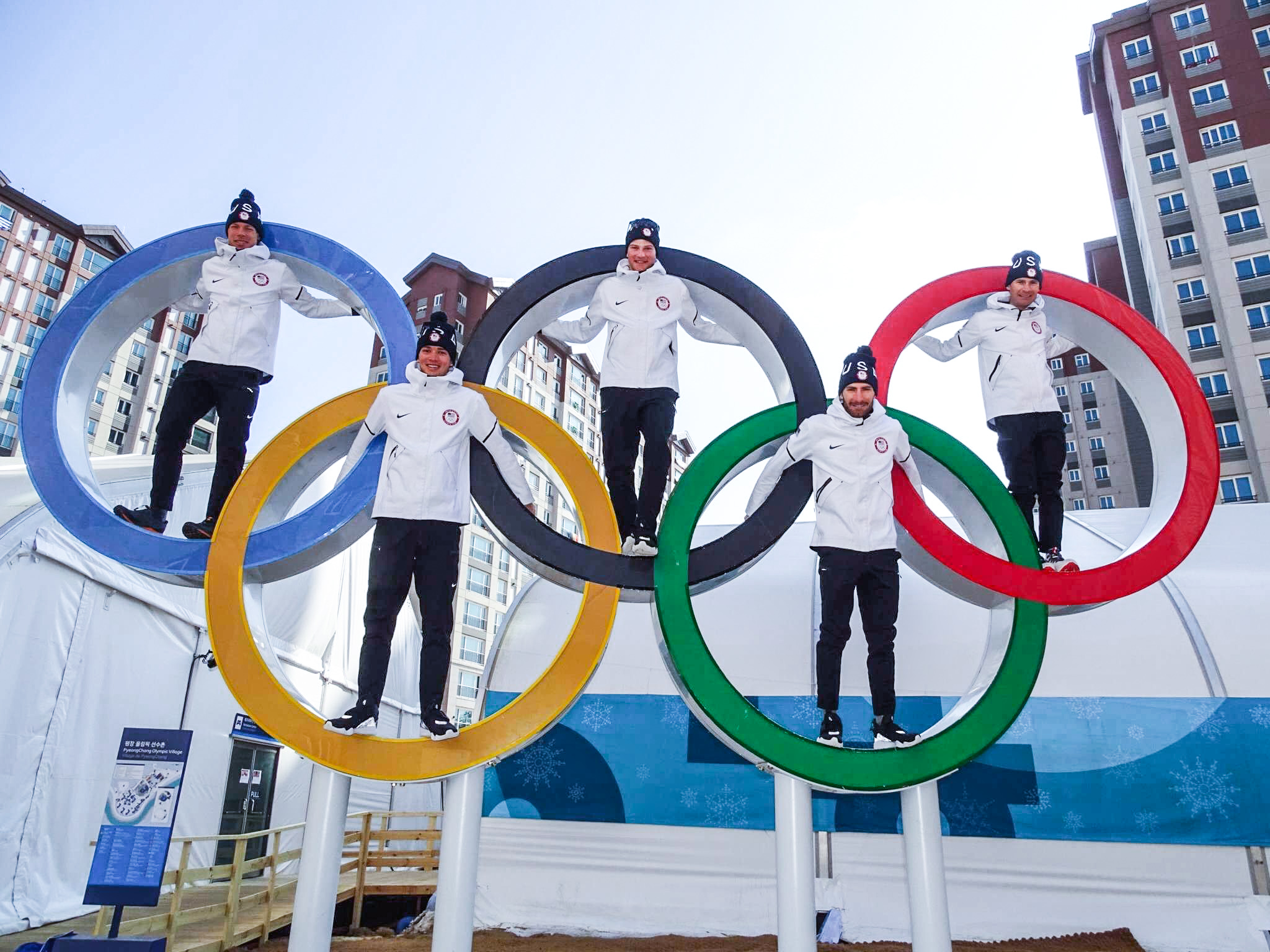 Once the bib is on, it’s the same game. Even though the stage is different, there is still a ski jump – the point is still to go as far as possible. There is still a race course – the point is to kill yourself. From the outside looking in, it all seems so big but I can speak for the entire USA Nordic Team when I say, we knew exactly what we needed to do once the moment came. We left it all out there and hopefully gave people something to cheer for, something to be inspired by.

I will also always remember those last four days in Pyeongchang with my USA Nordic teammates. We were done competing and had the freedom to do whatever we wanted. I think the fun we had together as a group felt so sweet because we’ve all had our heads down and heels dug in for a long while. We dressed like goons and went alpine skiing up on the Yong Pong Resort. Will Rhoads came up with the brilliant idea of trying snowboarding for the first time – so Kevin Bickner and I decided to join him on this pursuit. We traveled to the coast, walked the beach, set off fireworks, and took in the sights. We attended hockey games, curling matches, and Mike Glasder was on a celeb fest meeting Dale Earnhardt Jr and watching Big Air with Melania Trump. Long story short, we totally crushed it. During the season it’s very rare to get Ski Jumping and Nordic Combined together for very long. Getting three weeks together was a truly memorable experience that I feel has bonded us all for life. As if we weren’t bonded enough by our ROTC Death Training Camp last spring (more on that another time). It has also made me decide we need to do some more training camps together during the season. 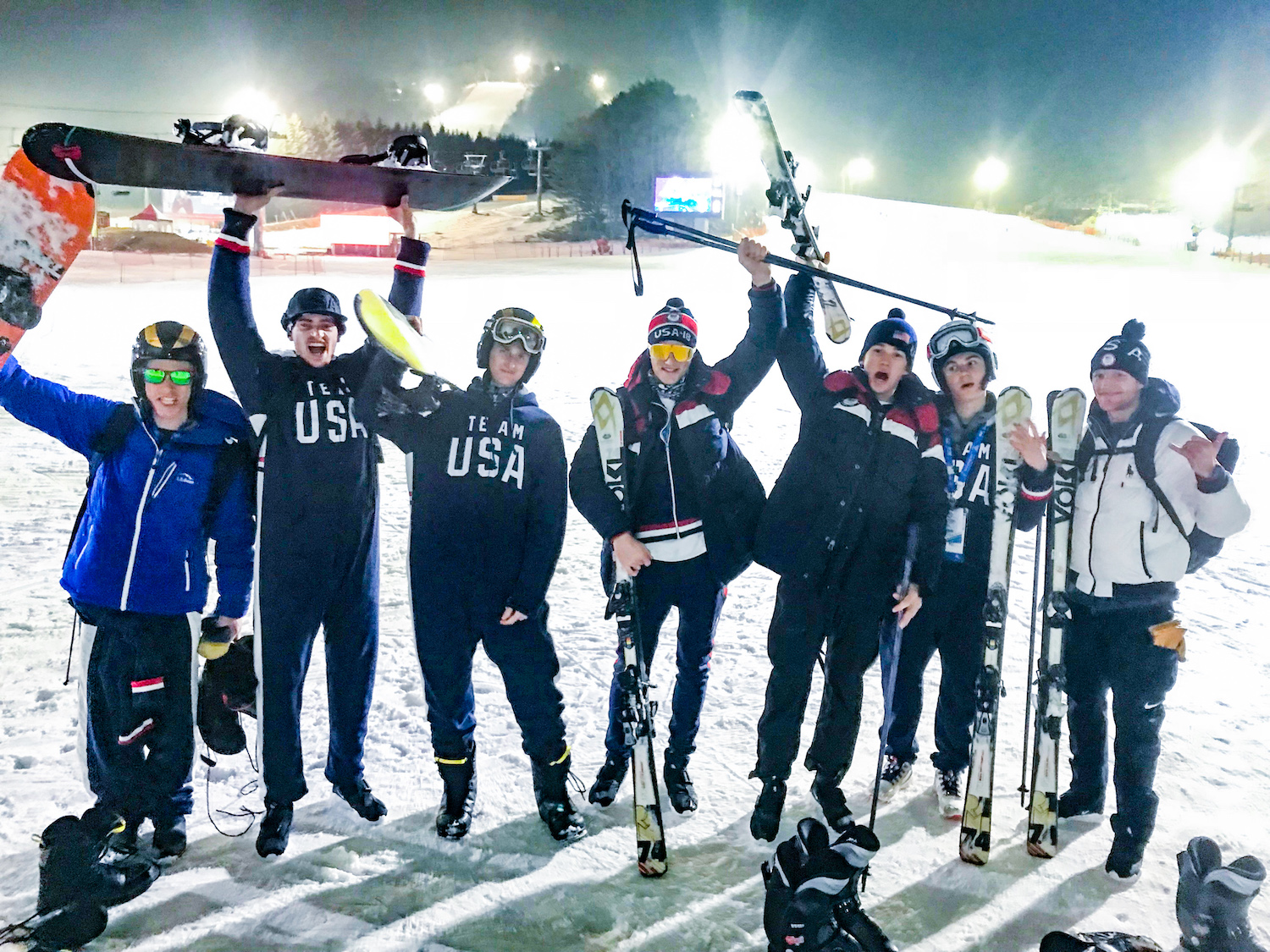 Lastly, I just want to give a cheers to Abby Hughes and Bryan Fletcher. They just competed in their last Olympics ever. Bryan, you are the man. I will never be able to repay you for everything you have given to me over the last couple years. You have taught me so much. Yes, we are all athletes and our job is to perform, but more importantly, our job is to be good people and give back. I think that nobody gives back quite the way you do, and I want to thank you for that. Cheers to an awesome career.

Kevin actually forgot to bring his equipment to the competition the day he finished 18th (the best American finish in ski jumping in a long time). Ben Loomis had to hop on a bus and bring his equipment to him. Kevin also lost his opening ceremonies coat and credentials. To be honest, he was probably overwhelmed with his new found fame. Kevin is HUGE in Korea right now.

Even though we were all wearing the same clothing, Ben Loomis still found a way to stand out from the crowd – per usual

DJ of the games: Bryan Fletcher

Bryan had some pretty fire playlists going in the changing room. Not bad for an old dude.

Dad of the games: Bryan Fletcher

Most famous: Casey Larson
Casey became famous when some Olympic historian decided he was the 100,000th man to compete in the Olympic games. Some may think this was random luck, but he knew exactly what he was doing.

Cupid: Casey Larson
He truly fell in love with every girl he laid his eyes on.

Team Planner: Jasper Good
Jasper is amazing at plans. I just follow him and know I’m going where I need to go at the right time.

The guy who pretends to know about aerials: Taylor Fletcher
Taylor Fletcher got to share the experience of the Olympics with his girlfriend Kiley McKinnon (Aerial skier). How cool is that?